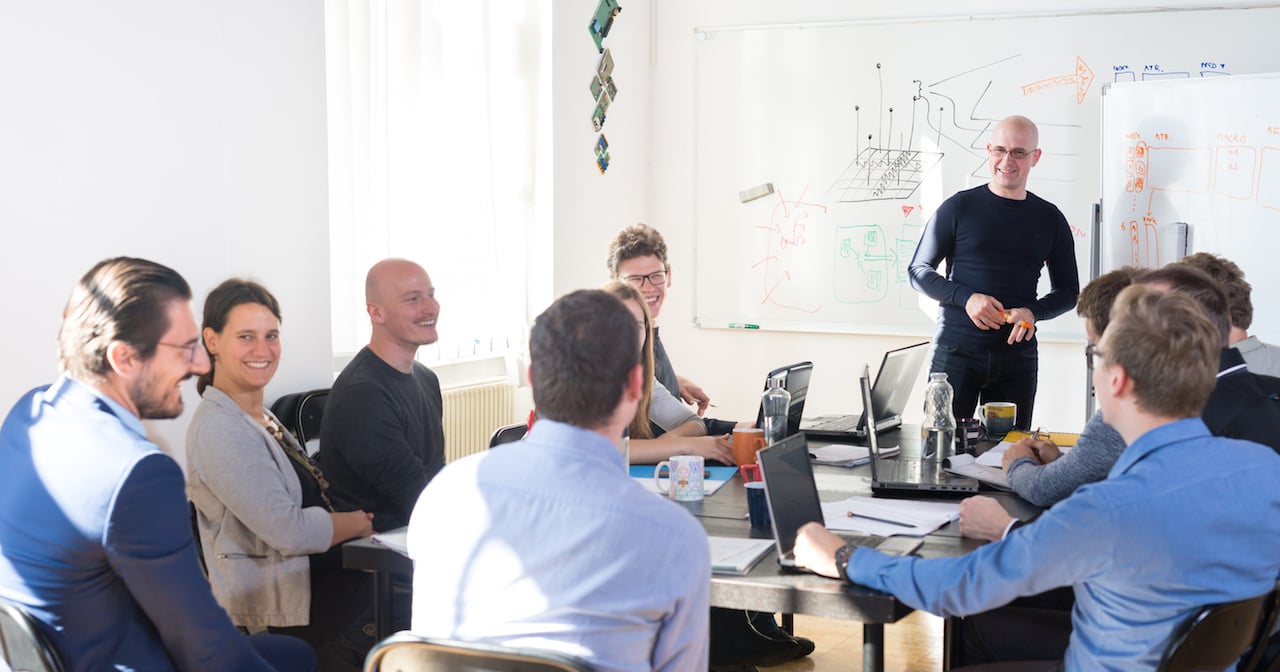 While it's true that employees are critical to an organization's ability to respond to market shifts, it is buy-in from the C-suite that ultimately determines the company's success. In fact, 87% of the report’s survey respondents view the CEO as the biggest proponent of organizational agility. And it's usually a company’s investors or board of directors in pursuit of greater growth who pressure the CEO to lead an agile adoption.

To successfully lead an agile adoption within their own companies or organizations, executives must first adopt an agile mindset themselves and then find a way to communicate agile principles to others. It's not an easy journey; significant change never is. But CEOs and upper management are discovering what it takes to drive the adoption of agility across the enterprise.

Be prepared for an uphill battle

The potential rewards of agility are well worth it. But be prepared for a bumpy ride.

One of the first challenges a CEO may encounter in an environment that encourages self-organized teams and delegation is the impact on mid-level management. Agile sheds light on all areas of an organization. Priorities and processes within departments that previously operated under the radar become transparent. And they often reveal a level of corporate politics and empire-building that stifle innovation and slow down delivery to market. A company’s archaic, siloed structure may also impede progress, as its departments aren’t streamlined to support vertical products.

"The thought is if we just get people together and have them run in Sprints, we're going to get all this innovation and morale," said Jesse Fewell, a certified coach, trainer, and founder of Fewell Innovation. But it doesn't work that way. Instead, senior leaders find that agile methods alone are not enough to achieve agility. It's why agile transformations are always halfway done. "CEOs are discovering that Agile is just the admission fee to the innovation game," Fewell added.

The good news is that by identifying problems that impede agility, CEOs can now move their companies forward. And they do that by having difficult conversations with direct reports, shifting headcount, or restructuring the company. The reward is that your company will maneuver faster, increase productivity, and enhance employee engagement.

Case in point: The CEO of a medical technology firm that Justice worked with restructured the company from skills-based siloes to cross-functional teams that included employees from each skill group. This reorganization reduced the company’s 10-year development cycle to one year or less.

"It's happening business after business," he said. "Senior leaders are choosing to restructure the company for agility instead of being driven out of business by a competitor who's already done it."

Focus on company values that already align with agility

To encourage agile adoption among staff, CEOs and upper management may not have to look far for inspiration. The existing company mission statement and company values might have the appropriate message that will resonate with employees. For example, many organizations emphasize customer satisfaction, which easily correlates to agility. But if senior leaders take stock of past behaviors to see if the company actually lives up to that value, they'll find that too often it doesn't.

"Organizations have the right mission, the right values, but they're just not paying attention to it," said Bob Hartman, a certified coach, trainer, and founder of Agile for All.

The key for leadership is to hold themselves and employees accountable to that particular value and have a conversation around it to show how it can help the company achieve greater agility. Instead of asking a team when a product is going to ship, executives can start asking, "How can I help you make sure it gets out on time?" That shows employees that leadership is in the trenches with everyone else rather than firing off demands from the ivory tower. Employee reaction to such a question may be disbelief at first. But if executives exhibit consistent behavior by offering to help time and time again, the company culture will change, Hartman said.

Prioritization is another company value that correlates well with agility. However, whereas priorities might have been set annually or quarterly, they're now being set weekly or even daily by companies undergoing an Agile adoption. In one company Justice worked with, the day’s top priorities were publicized on paper billboards as wide as a city bus at the front door of every building at each major campus. That ruthless prioritization got everyone in alignment and resulted in tremendous financial growth. "The top drivers of low morale are people feeling their work isn't meaningful and being forced to multitask to the extent that they feel pressure that they're late all the time," Justice said. "Prioritization directly addresses both of those, which is important for any agile method."

Frame agility as a pre-existing condition

The concept of agility doesn’t have to be a mystery. A company’s ability to sense and respond to fast-emerging market trends as well as deliver customer value is something that executives and their employees can grasp if it’s framed the right way.

For example, big companies usually understand continuous improvement. Most of the large organizations Justice works with have already been through Lean initiatives, so adding transparency and teaming isn’t a big leap. At the same time, successful startups know how to prioritize. What they don’t have is the structure that allows them to move quickly with hundreds of thousands of employees. “Big companies want to be as nimble as the startups, and the startups want to grow to be as big as the big companies,” he said. “For both of them, they’re finding the answer in Scrum.”

Adopting an agile mindset may be even simpler than that. Hartman pointed out that when wrenches are thrown into work projects, people react like the sky is falling. Yet most of us are fully capable of handling constant disruption in our personal lives. We avoid accidents on the road, adjust to cancelled flights, and deal with uncooperative children. “It’s not the practices you use, it’s how you think about the practices you use,” Hartman said. Take a company’s budgeting process. Instead of budgeting 12 months in advance, which can be a losing game in a shifting financial market, maybe it’s time to change the way projects are funded or how they’re scheduled.

Another way to look at the problem is identifying people who are diamonds in the rough within the company and nurturing them to lead. A chemical company Fewell worked with wanted to upgrade its manufacturing floor. When executives posed the question to employees on the best way to accomplish the task, one of the employees had heard of Scrum and suggested they look into it as a solution. Leadership tapped this employee and built a team out of the best talent within the company, then reached out for training, coaching and a full-time Scrum Master. Within six months, the company had achieved a hundred times ROI over six months. It’s a pattern in successful agile transformations that Fewell continues to observe, in which companies identify and grow the best version of themselves, rather than bolting on agile from the outside. “There is an abundance of assets you have at your disposal, and that is where you should start the agile conversation,” he said.

Be agile rather than explain agile

One of the dangers that leaders encounter on the agile journey is thinking it applies to everyone else except them. Agile represents a fundamental challenge to the leadership mindset – that they are the smartest people in the room and their job is to educate everyone so that the company will be successful. But that’s not how it works.

The best way for leaders to explain agile is to embody it. “If executives act in accordance with openness, transparency, respect for people and focus, that is what creates the effect across the company,” Justice said.

Consider the case of "Janice," a CIO that Fewell worked with, who noticed that one of her agile projects was in distress. The Scrum Master was documenting impediments, but not holding people accountable. The CIO opted to embed herself side by side with the Scrum Master to role-model behaviors and demonstrate how to get past those hurdles. By pairing herself with an employee three levels below her, the CIO clearly communicated that she was as committed to agility as anyone else on the team, and willing to walk the walk. “The number one challenge for agile leaders is to be impatient with the status quo, but patient with the people in it,” Fewell said.

Another effective way to communicate agile is to review a project that didn’t go well and walk through the course corrections the company could have made that would have led to success. Those adjustments, of course, are doing things in a more agile way.

“The best agile transitions have occurred when leadership teams have made it very clear that they aren’t expecting perfection,” Hartman said. “They’re expecting change and they're expecting change to be difficult for everyone. They’re not going to be perfect either. But together, the organization will grow through it.”

Leaders who have an agile mindset will continue to play a critical role within organizations that want to survive and thrive in today's competitive marketplace. No matter what industry they work in, CEOs and senior executives now realize they must be the biggest champions of organizational agility if they want to change the work culture, foster innovation, and drive growth.

5 Things to Consider When Hiring an Agile Consultant

Ready for your own agile transformation? Use these tips as you vet a third-party consultant:

To learn more, read “The Elusive Agile Enterprise: How the Right Leadership Mindset, Workforce and Culture Can Transform Your Organization.”