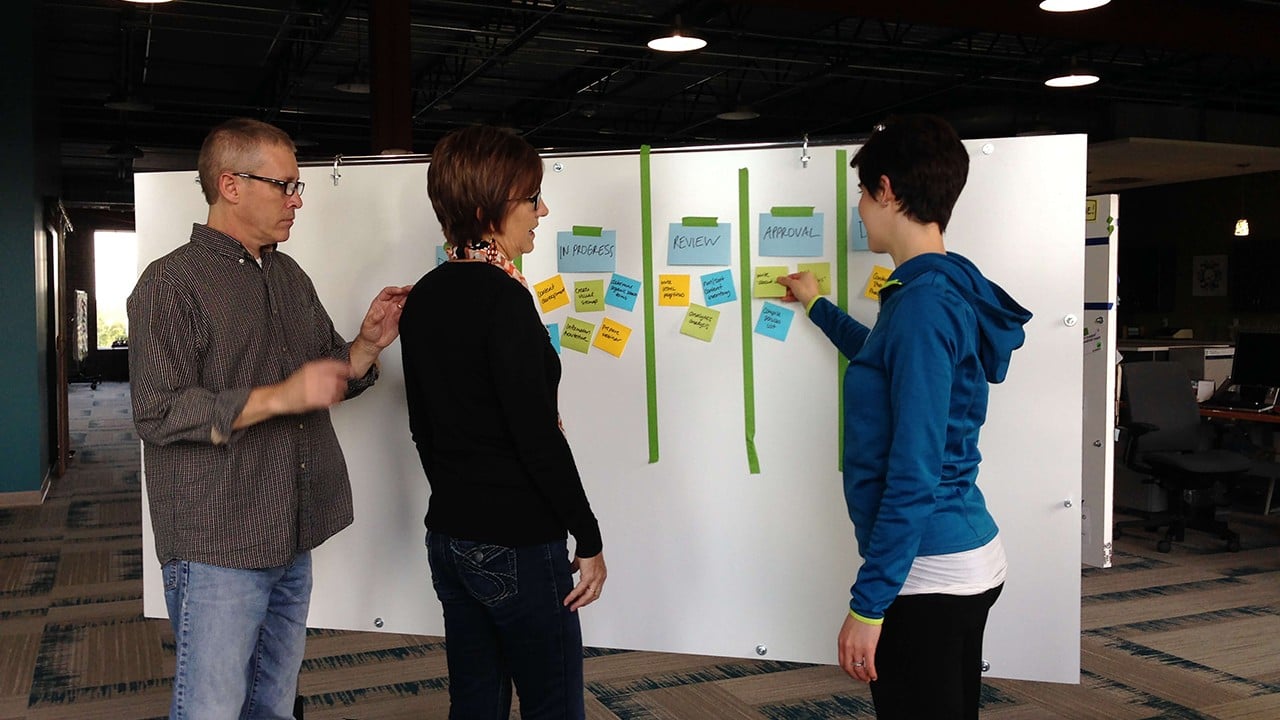 “We knew this was going to be a bit of a shock to people.” That’s how Eric Engelmann describes planning the radical agile transformation that put his company in the forefront of the movement to eliminate traditional management structures.

It all started, says Engelmann (who is now also a Scrum Alliance® board member), when he set out to replace a software manager who had left the company. “I was talking to Richard Lawrence of Agile for All, who had run a boot camp for us, and he pointed out that I shouldn’t need a manager to hold the team accountable if they were performing as a Scrum team should.”

Suddenly, Engelmann says, “I realized I’d been missing the whole point of agile.” He decided to begin experimenting with self-organizing teams, starting with the software team in question. “We basically optimized the hell out of that team until we realized the constraint was the hierarchy itself,” says Engelmann.

So what did he decide to do? Banish hierarchy altogether.

“On the first Monday in January, 2013, we had a company-wide meeting and we basically said, ‘You no longer report to whoever you used to report to. Now you report to the client —that’s who we need to keep happy,’” says Engelmann.

It was nothing short of a complete overhaul of company practices and policies, radiating through just about every aspect of how Geonetric does business. The four key components:

Engelmann laid out the ground rules, explaining that daily stand-ups would be required, as would retrospectives, and clarifying the responsibilities of the product owner. “We said, ‘Here’s how we think it’s going to work — but to be totally honest, we’ve never seen anybody do this before, so this is our best guess.’”

“It was pretty much rip the Band-Aid off,” says Molly Kovarik, senior agile coach, who trained as a ScrumMaster to facilitate the transition.

Unsurprisingly, the reaction wasn’t universally enthusiastic. “To be completely honest, when Eric first started talking about this and saying he was looking to roll this out over the entire company, I told him, ‘I think you’re crazy, I don’t see how this can work,’” says Andrea Joyner, director of account strategy.

However, Joyner says, her respect for Engelmann and what he’d done with the company up to that point overcame her skepticism. “I said, ‘I trust you, and if this is what you want to do, I’m going to try to make it work 100 percent.’”

Luckily, Geonetric employees had already had rigorous practice in working as agile teams. In October 2012, just as Engelmann was planning Geonetric’s upcoming transformation, the company launched Operation Overnight, a charity event in which Geonetric employees build websites and digital marketing campaigns for local nonprofits — all in one 24-hour period.

“Everyone comes to work at 8 a.m. Thursday morning, and they have until 7:59 a.m. Friday morning to finish up, and that’s it,” says Engelmann. Nonprofits apply for selection and their representatives are onsite for the entire process, giving continuous input and feedback.

Now a highlight on the company calendar, the annual event has grown exponentially, with 21 projects completed.

While the event was conceived as a way to give back to the local community, it also functioned as a sort of trial run for all-aboard agile. “The idea was to simulate what it felt like and show people how much you actually get done in a very short amount of time,” says Engelmann.

And there’s no question that it turned into the perfect training opportunity. “That first year, we were really early in our agile adoption, and we learned a lot about functioning as agile teams,” says Joyner. “Then we were able to take that back to our regular roles and teams, and it helped push us forward.”

Adds Kovarik: “I’m pretty confident that Eric thought, ‘I have some skeptics; I have to show them that this can work,’ so he used Operation Overnight as a way to throw people into the pool.”

How does it work?

When executives and managers hear Engelmann talk about Geonetric’s groundbreaking management style, what they want to know are the specifics — how do things work when there are no clear lines of authority? Here are the answers.

“How will I get feedback if there’s no manager doing performance evaluations?” This is the first question most employees asked when he announced the change, Engelmann says. The answer is simple, but not necessarily easy. “Feedback comes from those you’re working with, whether that’s in a retrospective or in a one-to-one conversation,” Engelmann says. Not surprisingly, it wasn’t a popular idea.

“At first, we heard a lot of ‘How do I tell someone I don’t like the way they do something?’ That’s understandable —this was definitely a change in expectation, and communicating like this isn’t a skill most companies have spent a lot of time teaching people.”

In preparing for the reorganization, Geonetric had trained four full-time coaches, Molly Kovarik among them, and they worked on communication skills as part of collaborative teamwork. “We taught people how make qualitative observations and have a conversation that’s respectful and constructive,” Engelmann says.

Coming to understand the agile value of teamwork over individual performance helped. “I told people, ‘It doesn’t do us any good to have a great quarterback if we have a wide receiver who can’t catch.’ You have to be able to work well together.” Still, some employees balked. “We did hear, ‘I don’t want to have difficult conversations, I just want to code,’ and in that case we had to say this might not be the right fit for you.”

Few areas have required as much out-of-the-box thinking as financial planning, which in a traditional organization is the responsibility of managers and executives. Geonetric has taken a “morphing approach” to the issue, developing a financial modeling framework that allows teams to plan out a budget based on factors such as projected revenues, aggregate labor costs, and other assumptions — all information the CFO then takes into account when allocating company resources to each team.

“Teams are given the opportunity to debate the budget, talk about the assumptions that go into the financial model, and argue for a different one if they want to,” says Engelmann. “By and large, teams each create a budget that then rolls up into the company budget.”

Without a hierarchical management structure, it’s been necessary to change how the company recruits and hires. When a team believes a project requires a new hire, it’s their responsibility to justify the salary cost with evidence based on their financial model of revenues versus expenses. Job descriptions are posted by the HR team, which prescreens candidates to make sure they meet the requirements of the position. But after that, the decision is up to the team. “The entire team participates in the interview process, and they really look at whether the person has the skills and attitude they want on the team,” says Engelmann.

While salaries aren’t posted, they are structured into five bands that cover the four categories of professional, technical, sales, and operations, with all employees having the ability to move from band to band. “Each band has a salary range and everybody knows what band you’re in, so it’s transparent in that way,” Engelmann says.

Once a candidate is chosen, the executive team does a final “gut check” review to make sure nothing’s been missed. “It’s almost like a recipe; the team sees certain ingredients, but there might be something we see, too, like some teams really lack a contrarian who can ask difficult questions, and we might raise a concern like this.” But in the end, he says, more than 90 percent of candidates chosen by teams are ultimately offered jobs.

As a general rule, the company is organized into traditional cross-functional Scrum teams. But with the key rule being self-organization, the process of how teams are structured has evolved to accommodate the company’s unique organizational style.

Other times, employees pull together just the right combination of people for a specific purpose. “If a client is looking for a redesign, we pull together a more cross-functional team for that,” says Kovarik. “It’s kind of a mind shift; if we think we need a team that looks like this, then we go ahead and do it. That’s the self-organizing principle at work.”

The combination of complete transparency, self-organized teams, and a managerless organization has made for some interesting challenges when it comes to strategy. Geonetric addresses this issue with company-wide meetings in which each team presents their backlog and describes challenges and successes.

“They talk openly about clients who are happy, clients who are unhappy, employee turnover, finances —they own it,” says Engelmann. Financial data are posted publicly. The process isn’t easy, he says, but it’s been the most beneficial piece of the transformation in terms of accountability.

“Think about it: You have to stand up in front of 50 of your peers and announce, ‘That thing we said we were going to do, well, we missed the target, or nobody bought it, or we screwed up.’ That’s not something most people want to do.” On the other hand, says Engelmann, “You might get to stand up and say, ‘Guess what? We blew the target out of the water.’”

Presentations are followed by a Q&A in which anyone can ask anything he or she wants. “It really puts the responsibility and emphasis on the individual and the team, rather than relying on managers and those at the executive level,” says Joyner. “It’s up to the people who are doing the work to make things happen.”

And thanks to this sometimes-uncomfortable process, everyone in the company knows what everybody else is doing. “I think we’re all much more aware of the impact we have on the company as individuals and teams,” says Kovarik.

“When people say this sounds daunting, they’re right. It is really hard to do. It’s not like there are a thousand Harvard Business Review articles telling you how to do it,” says Engelmann, laughing.

But there’s no question Geonetric’s transformation was worth the effort, with clear evidence of success that includes:

Financial results, though, aren’t the primary reason to consider making the switch to a leaderless management style, Engelmann says. “We have gotten positive results, but there are a lot of companies that make more money and grow faster that don’t do things this way,” Engelmann says. “The real evidence of success is that we have the highest client satisfaction scores in company history.”

Employees are happier, too. “It’s helped us increase our ability to recruit and retain people,” says Engelmann. “It’s a way of creating skills that might not otherwise come out of a workforce.” The slogan on the company’s website couldn’t make it any clearer: “Meet us — Zero managers, 70+ leaders.”

The company’s passion for innovation is causing others to take notice. Geonetric has twice won the Alfred P. Sloan Award for Excellence in Workplace Effectiveness and Flexibility, and for the past three years it has been certified as a Freedom-Centered Workplace by WorldBlu, a company specializing in democratic leadership and organizational design.

Less quantifiable but equally central to success is the change in the mindset of company employees, all agree. “Becoming agile has helped us work differently, both as individuals and as teams, and it’s helped the company grow and shift in an ever-changing market,” says Joyner. “We’ve become a company that’s comfortable with change,” says Kovarik.

Engelmann sums it up this way: “Working at Geonetric has always had an edge of fun to it, but the last three or four years have been a hell of a ride.”