Reaping the Benefits of Agile 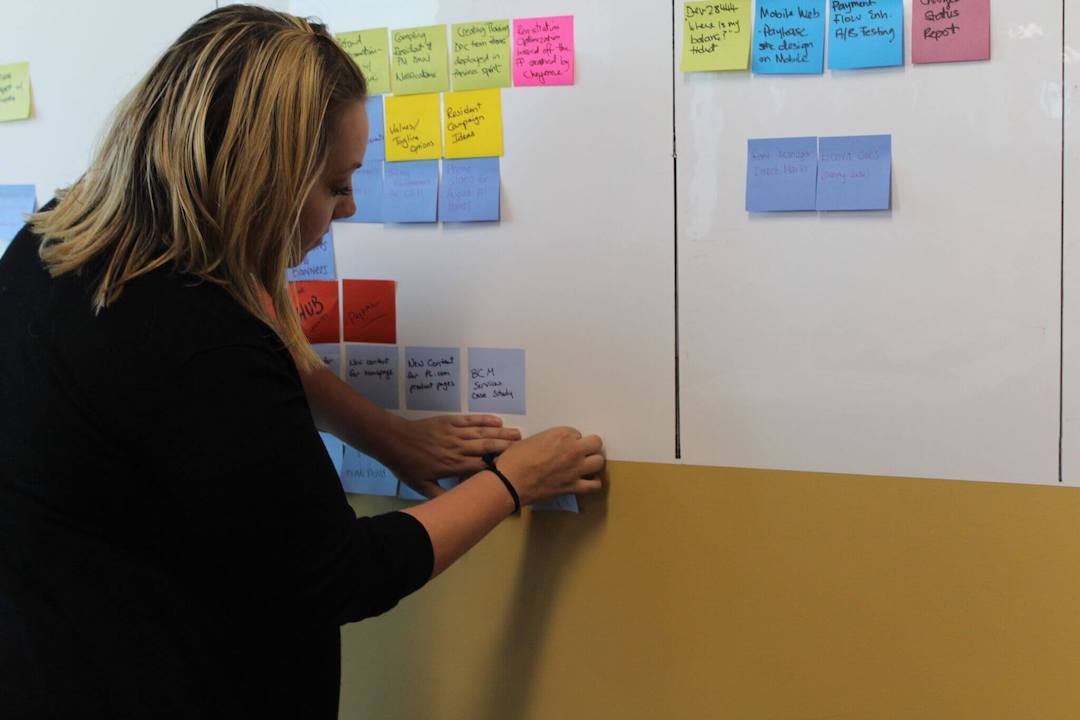 When the marketing staff at PayLease tore down their cubicles, they made a bold statement about transparency.

It was the first physical step in the team’s agile transformation that the rest of the company could clearly observe, and it served as a conversation starter. As marketing staffers gathered in front of their whiteboard during their daily stand-ups, other employees would walk by, take notice, and ask, “What are you guys up to?”

Michelle Hammer, who until recently was the company's director of marketing, said it was like TMZ, referring to the celebrity news TV show where reporters are filmed talking about the day’s events. Agile wasn’t a new concept for PayLease, a leading provider of online payments, resident billing, and utility expense management tools for homeowner associations and property management companies. Kristin Runyan, now the senior vice president of talent, had introduced agility to engineering and product management when she was hired in 2014.

Since those departments were already successfully using Agile, “it was easy to take the concepts to the rest of the company,” says Runyan, a Certified ScrumMaster®, Certified Scrum Product Owner®, and the author of two books on agile. Employees “immediately got it, even though it was not something that they thought applied in their department.”

The impact on marketing was profound. Within a few months of the agile rollout in 2015, the team had embraced transparency, collaboration, and communication. As a result, it morphed into a faster, more confident team, with the ability to accommodate the needs of the sales force and other departments it supported.

“The whole thing about going agile is it’s actually better for the business,” Hammer says. “It’s not about it being better for one person or one department.”

In 2011, when it had barely 20 employees, PayLease created a marketing department. As the three-person team fielded incoming requests, Hammer recalls the staff constantly putting out fires and accommodating whoever had the loudest voice or the highest title. Marketing operated on a first-come, first-served basis, completing projects in the order received rather than prioritizing them strategically.

“If someone gave you a project, you were the only person responsible to get that project done,” Hammer explains. “It didn’t matter that you weren’t the expert. You happened to have the bandwidth that day.”

For example, marketing produces an annual marketing survey white paper. Prior to going agile, one copywriter managed the entire project: sending out the survey, writing the report, and designing it.

“In our heads, it made sense,” Hammer says. “One person gets the project and they do the project, while I’m over here doing my work. There wasn’t any collaboration. It seemed foreign to have too many people working on the same task.”

When Runyan took marketing under her wing in 2015, she quickly assessed the situation. Each team member — whether a copywriter, graphic designer, or tradeshow specialist – functioned in a silo.

“They were all tasked with their individual action items, but they really didn’t understand how all of the pieces fit together, and they didn’t have an easy mechanism to distribute work or ask for help,” Runyan says. “The biggest thing that we did was to get a handle on prioritization.

“Marketing is the center of activity for PayLease, so lots of people come in with strange requests or a ‘great idea.’ Because the marketing team is so nice, helpful, and accommodating, they were running themselves ragged.” The team was ready for the change.

“It was like a saving grace,” Hammer recalls. “We were dealing with these ebbs and flows of work that we couldn’t handle. Each of us was constantly saying no to someone. We understood this was going to change our lives for the better.”

Ready for a change

Runyan introduced simple things first: a progress board and daily stand-ups. This broke down silos within the department and offered staffers a clear view of everyone’s work and priorities, whether it was website updates, email campaigns, trade show collateral, or the latest case study.

At the same time, she socialized agile around the company, explaining the concepts at monthly all-hands meetings and with the sales team. She already had buy-in from the CEO, who had hired her in the first place as an Agile coach. He distributed copies of her book, Change Inc.: An Agile Fable of Transformation, to anyone who wanted one.

After a few months, the team tore down their cubicles, which Hammer says felt like the fall of the Berlin Wall. All of the sudden, the rest of the company could see the team working, collaborating, and getting things done.

What didn’t change, however, was the workload. For that, the team had to learn how to communicate and how to say no appropriately, not only with each other but with employees outside of the department.

Runyan coached her staff on how to explain which projects were prioritized and why; the progress board clearly helped illustrate that. She also established a process for funneling larger projects to managers to delegate. That way, no single person would get stuck handling a stream of one-off requests.

To offer better transparency for sales, the team’s biggest internal customer, marketing created a sales queue on the company intranet so that sales could see what projects the team was working on and where each item fell on the list of priorities.

Even though the team was excited to go agile, it experienced a few bumps along the road. For example, one person on the team didn’t accept the new way of doing things, and she left. Also, in their zeal, marketing staff put too many people on projects and found it was like throwing too many ingredients into a blender and jamming it.

“We had to quickly learn that only one person should be working on a piece of a larger project at one time, so there’s no confusion,” Hammer says. The solution came down to open communication and transparency, ensuring that everyone knew what cycle the project was in and who was working on it. And they learned to check their egos at the door, especially at their own marketing meetings, where the staff discusses their work in an open forum.

For example, if a staffer usually manages a particular task but doesn’t have time due to other priorities, then it’s time to let go and give someone else a shot. “Maybe it’s not the same way you do it, maybe it’s not the best way, but in order to get the project done, we need to have someone else try it,” Hammer says. “And if it doesn’t work, we just know, moving forward, that that didn’t work.”

In other words, fail fast and move on.

Since the marketing team underwent an agile transformation in 2015, they’ve become far more efficient and streamlined. That annual marketing survey report mentioned earlier? Now one person gathers the important pieces of information to include in the report, the copywriter writes the report, and someone in creative designs it. A senior graphic designer checks everyone’s work.

“We’re able to bust things out so much faster,” Hammer says, “because every single person is only doing the portion of the job that they’re actually best at. By having two to three people touch a single project, you’re always able to catch mistakes. And it doesn’t feel like so weighty, having one person in charge of something.”

Of course, when the team was small, it made sense for one staffer to handle a project from start to finish, because there wasn’t anyone else to do it. “But there was a fundamental switch that we had to make when going agile,” Hammer says. “We had to understand that it’s OK, it’s actually better to have more than one person working on a single project.”

That also led to cross-training among the staff, which meant more flexibility when managing the workload. Now everyone has the opportunity to try their hand at different projects, collaborate, and develop skills they didn’t know they had.

Sales has definitely noticed a big change since marketing went Agile. Ryan Connors, the vice president of payment sales, says that when inbound leads come in, a fast response time on targeted email campaigns, case studies, and pitch decks is absolutely critical. The longer it takes to get back on an inbound lead, the colder the lead gets. “You lose that momentum, and in sales it’s a killer,” he says.

Connors has witnessed the marketing team’s response for collateral go from slow and clunky to a well-oiled machine. “They execute the right way and in a timely fashion,” he says.

He appreciates the cross-training, which means someone is always available to help out. The online sales queue that marketing created gives a clear view of what everyone is working on. And with Hammer attending weekly sales meetings, marketing always knows what’s coming down the pike from sales and can prioritize as needed.

Increased agility has had an impact not only on the marketing team’s performance but also on its confidence and overall morale.

With team members no longer siloed and now collaborating with different people within their own organization as well as outside of it, their knowledge of the business has increased. So has their confidence, as staffers improve their skill sets while tackling new work in a safe, supportive environment.

Confidence comes from fostering communication skills, too. A young staffer just two to three years out of college will feel comfortable talking to a senior VP of another department. “Their ability to prioritize is incredible,” Hammer says, “and I think that’s what gives them the confidence to say yes and to say no.”

Agile has also given them a sense of freedom and control. Marketing staffers know what they have to get done, and they can figure out what matters and why. “That just gives people such a sense of freedom,” Hammer says. “And they enjoy their day more, because it’s not someone barking out orders. They’re really creating their own week.”

PayLease is lucky, because its executives support agile. Aside from marketing, product management, and engineering, Runyan has introduced Agile to other departments as well, such as the call center, client services, and account management. “It’s very important to our CEO that we talk to one another and not hide behind email or create departmental silos,” Runyan says.

Still, even the most supportive environment doesn’t ensure immediate success. Hammer suggests that any marketing team looking to try and become more agile must be willing to give it a chance for six months.

“Give it a fair shot, go all in, and if it doesn’t work out, no problem, you can roll back. But if everyone single person on the team is willing to try it out, chances are it will work.”