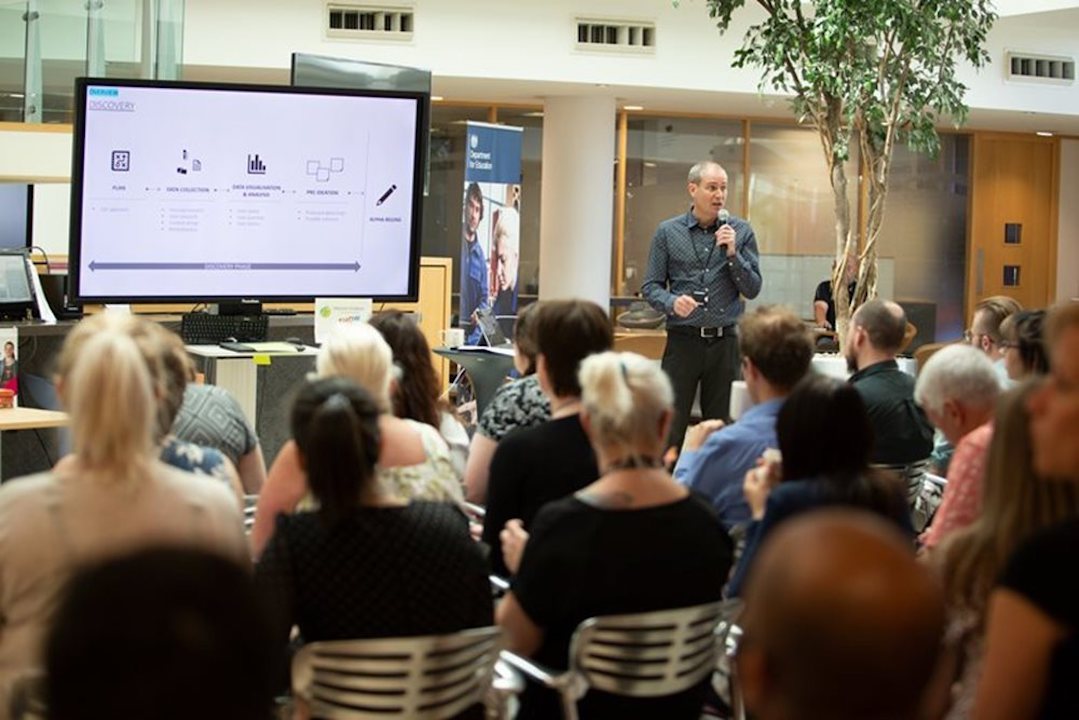 The U.K.’s public sector is not synonymous with innovation and agility. But a hardcore group of innovators at the agency delivering huge reform for apprenticeships are transforming their organization for the better through agile.

The Education and Skills Agency (ESFA) based in Coventry in the Midlands is embracing Kanban, stand ups and retrospectives to deliver a national scale apprenticeship program to support a changing culture of training for young people entering the job market.

ESFA is the U.K. Government organization responsible for £63 billion of funding for the education and training sector. It’s behind the National Apprenticeship Service which during 2017, went through a period of reform.

The reformed service required a new digital platform to be launched in time for the service rollout from May 2017. Prior to this, the Find an Apprenticeship service was one of 25 exemplar projects chosen by the Government Digital Service to transform how they work online, with agile methodology at the core of its delivery.

Jon Dalton, head of intelligence and systems at ESFA, says it succinctly: “This reform was fundamental in how apprenticeships work in this country. The biggest driver was giving employers control over apprenticeships. Overall, the service is better connected and creating a more dynamic marketplace. We are working to increase the number of apprenticeship opportunities.”

The U.K. Government has committed to supporting 3 million apprenticeships starting by the year 2020. Currently, the team is working at 600,000 starts per year. In fact, the department has gone from one agile team working on a digital platform for finding apprenticeship placements, to 16 multi-disciplinary development teams covering a broad range of functions.

“Agile has been a game-changer for us,” said Dalton. We had a long track record of delivering digital services, and this has by far been the most successful approach. It’s transforming the way we work. We are empowering people to get the job done. Traditionally, government departments can be hierarchical and high risk, and we’ve proved this works.”

Eileen Logie is deputy director of the Education and Skills Funding Agency, and under her leadership an agile culture has thrived. She describes the impact agile has had not just on her teams and department, but the wider culture of the organization.

“It’s progressed from Scrum and Kanban to changing the actual DNA of government agency. albeit in a low-key way," says Logie. “We worked in small groups that have had implications of huge change.”

Last year, Logie returned to EFSA following at two-year stint at Sage, an accountancy software company. She was seconded from the Cabinet office as a digital transformation leader, at a time that the company was responding to market disruption with many users looking to move to subscription, cloud-based accounting solutions.

“The big thing that came out of this is that whilst the civil service is brilliant at delivering, the commercial world is on a different scale,” Logie says. “Sage [has] huge belief in their product, their brand, and their CEO. They are the only British IT company that are still in the FTSE 100.

“Their speed to at bringing a product to market and responding to disruption was incredible to see. It also brought a different perspective around value –there was a clear focus on the bottom line and how customers would respond to paying for their service.”

This experience in the commercial world brought valuable perspectives to her work within government agencies.

Logie’s earlier experience as a digital leader was built through working with the G-Cloud framework – a Government Digital Service program that aimed to encourage adoption of cloud computing in the public sector.

Pioneered by Chris Chant, director for Digital Engagement at Government Digital Service, it was recognised that public sector organizations were paying over the odds for their software and IT services. G-Cloud enabled providers to bid into a roster of suppliers. The framework represents at least £220 million of taxpayers’ money, but of this at least half has been spent with small- and medium-sized IT and software companies.

The success of G-Cloud reinforced GDS’ reputation within the U.K. Government as game-changing and transformative. Logie re-joined the ESFA in late 2016 as deputy director, where she was tasked with delivering a digital platform for the newly reformed service. This combined experience of the Government Digital Service together with a market-leading Sage paved the way for delivering a robust online presence for the Apprenticeship Service and managing agile teams at scale.

She said: “Our MVP was a digital account to pay the levy. Since then, we’ve built out into a feature-rich service. We’ve grown from 20,000 employer service users to 150,000, plus an additional 2000 or so training provider users.”

Find an Apprenticeship was one of 25 “Exemplar” projects chosen by Government Digital Service under the Digital Transformation Program to build services that are “simpler, clearer, and faster to use," according to Tucker. He remembers starting out as one Agile team at one end of the open-plan office, holding daily stand-ups.

“It was completely alien. I think they thought we were showing off!” Tucker remembers. “I was new to agile but I had the lightbulb moment.”

Tucker believes agile enabled his team to make sense of the complexity of the project and its requirements: “Other services chosen as an Exemplar project were fairly linear and transactional, such as tax or driving licenses – mandatory transactions that people must complete," says Tucker. “Apprenticeships are more complex. The metrics and KPIs are more complicated. We didn’tknow if we would be successful.”

Tucker has also become a specialist in delivering digital platforms that meet tough assessment criteria set by the government. Digital services that receive more than 100,000 transactions per year undergo rigorous testing.  This involves up to five hours of assessment by Government Digital Service, covering 18 criteria to ensure the platform meetings quality and functional controls. Tucker has experienced around 14 of these assessment rounds in continuously improving the digital apprenticeship service.

“We are scrutinized heavily, but it does carry the Government banner," reminds Tucker. "So, it’s about protecting that brand, and also evidencing that we are spending public money wisely.”

User experience at the heart

What’s very clear at EFAS is how they place users at the center of everything they do. The department employs a number of UX specialists that sit across the teams. Across the physical office space, user journeys are mapped out across walls.

The department also has a dedicated engagement team that goes out to the users to share information and take feedback.

Stand-ups take place regularly across the day, as well as “clans” – meetings of like-minded practitioners from across the interdisciplinary teams to share best practices.

Jason Poole is Head of Apprenticeship Operations, which takes over after a development has been released. His team focuses on continuous development while the service is still live, taking feedback from the engagement team. “The challenge is in incorporating the extensions of the service," Poole says. "It’s not necessarily the sheer number of apprentices, employers, and providers that are coming on board, but in how the service is growing and adapting.

“There is a constant mechanism where we are responding to user need. This is one of the most complex programs that’s been delivered [within the government digital service] and we’ve done it in record time. That’s quite an achievement.”

Another challenge arises where the digital operations interact with other systems across the organization–for example, finance. To tackle this, a model office team has been developed to test how different aspects of the service interact without interrupting the live function.

“There is often a tension between Agile delivery and the service operating effectively,” Poole admits.“We are constantly building operational capabilities as well as digital. We run test scenarios to check we are confident that we are working operationally.”

Poole believes a positive aspect of agile adoption across the delivery teams is that employees can be flexible about how far they adopt the methodology. “Everyone has their own flavor of agile, so we are constantly tweaking to make sure that link between the build and the test/run activity absolutely support each other.”

What has made the digital apprenticeship service more complex has been delivering change requirements in line with evolving policy. True to the Agile Manifesto, where stakeholders work with the Scrum team throughout the processes, the ESFA’s policy team work closely across the development teams to share what they've learned.

Mary Evans, head of policy, reiterates the need to show buy-in through participation.“It’s a very important part of our work that we are part of the ceremonies such as stand ups," says Evans. "We are there at the start of the journey to ensure the policy is being delivered in the best way to support the user.”

A recent agile adopter is Chris Bradley, a product owner who joined the Apprenticeship service one year ago. “I instantly fell in love with this way of working. It’s flexible enough to work with wider organizational change,” says Bradley.“It’s enabled us to think about wider policy changes and how they will impact our delivery.”

The Apprenticeship service now has 16 development teams, employing around 180 people. The success of the team has received national recognition by winning an award this year. In June, Logie and her colleagues were presented the Digital Public Service Innovation of the Year award at Digital Leaders 100 for their user-centered approach, delivered at industrial scale.

Part of this has involved clear vision and leadership – Logie has mapped out the end-to-end journey for all three of its core audiences – apprentices, training providers, and the employers. This is known as the “north star” and offers the clear future vision.

The team is also openly sharing its learning and opportunities for continuous improvement through regular blogs at https://sfadigital.blog.gov.U.K. These serve as a kind of public retrospective, allowing other digital and agile practitioners to learn from their efforts.

“Working out loud is very different, but it's encouraged. It’s important to show people what we are thinking," Logie says. "We get great feedback –from employers, from colleagues within Government, and from the training providers. They like to see how we are responding to user experience.”

Diversity is also of huge importance to Logie, and they practice what they preach by employing apprentices themselves.

Jamie McKechnie, age 22, is one of the recent apprentices to join the service. He came to the ESFA after a first stab at university and was attracted to learning while in the workplace. He now spends 20 percent of his time developing his skills with either formal training by a local provider, as well as peer-to-peer development with fellow apprentices within the organization.

His role in software testing has enabled him to explore wider opportunities in UX research. “I’ve been exploring what apprentices themselves want to see in the service: how they would like employers to advertise vacancies, what information they need," McKechnie says. “It’s become more and more apparent to me how important apprenticeships are. There are different levels, different subjects and the opportunities are getting better and better.”

Of course, it doesn’t stop there. In the true spirit of continuous improvement, ESFA is always looking for the next user requirement, the next opportunity to learn and build better experiences for its users online.

The next steps involve developing richer content for users to experience the service, including automated functions and more dynamic, personalized content. While the U.K. faces constant political change and pressure, we can put faith in our government agencies that they are working hard to respond this – with agile at the heart of delivery.